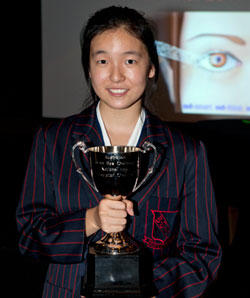 "It was fantastic that Australia won the International Brain Bee this year and also great that New Zealand came third – last year, we narrowly missed out by half a point! These students are the scientists of the future, and it is wonderful that they have this opportunity to compete in an international competition that is all about their intellectual attributes, rather than the physical prowess that is currently being celebrated."

The participant’s neuroscience knowledge was tested in various ways including oral tests, a neuroanatomy laboratory exam with human brains, a neurohistology test with tissue specimens and microscopes, and a patient diagnosis component with student actors.

As well as taking part in the competitions, participants at IBB were given a unique opportunity to learn about latest research in brain research through a series of lectures and activities conducted by some of the world’s top scientists specializing in the fields of neuroscience and psychology.

The Brain Bee, hosted by the International Congress of Psychology, is designed to motivate youth to learn about the human brain and inspire them to consider careers in neuroscience, psychology, neurology and related fields.

Prof Macefield, a world expert in recording the firing properties of human sympathetic neurones in health and disease, uses ADInstruments equipment in his research and teaching, “I have been using PowerLab (and MacLab) data acquisition and LabChart data analysis systems in my lab since 1994, and now use LabTutor to teach human physiology to medical students. It seemed an obvious choice to me to ask whether ADInstruments would be willing to support the scientists of tomorrow.”

More information about the International Brain Bee can be viewed at http://www.internationalbrainbee.com/

10 Tips for Teaching Online - How to successfully teach remotely and keep your students engaged
Celebrating Darwin Day - Preview Lt's new Population Genetics and Evolution Lab!
How to move course material from Microsoft Office, Google Drive, or LabChart into Lt
How to convert a LabTutor lesson into Lt like a pro: a step-by-step guide and video
How Lt makes it easy to create online lessons - Hear from current users about their experience authoring in Lt.