Laser Doppler flowmetry (LDF) offers a continuous measurement of blood cell perfusion in the microcirculatory beds of skin tissue and other tissues without influencing the blood perfusion. LDF is measured in a relative unit of BPU (Blood Perfusion Unit).

Ask a Question Book a Demo 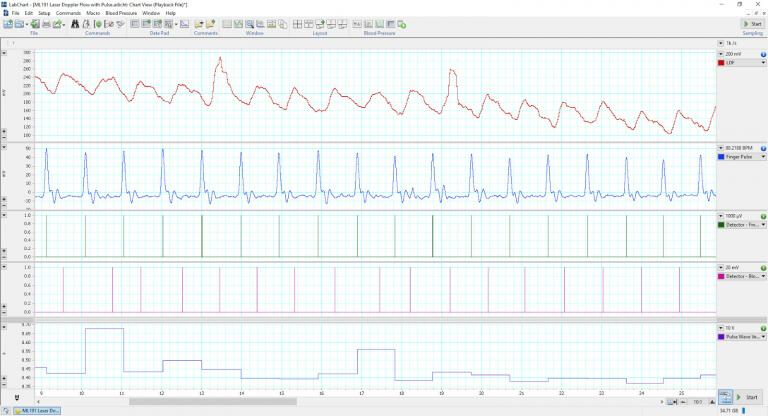 LDF makes use of the fact that when tissue is illuminated by a coherent, low powered laser, light is scattered by both moving and static structures within the microcirculatory beds. Photons, scattered by moving blood cells are spectrally broadened according to the Doppler effect. Maximum Doppler shifts occur when blood cells are moving in a direction parallel to the incident light beam and the detected light (scattered light) from the cells is detected in a direction opposite to its origin.
For example, a Doppler shift of about 4 kHz is obtained when laser light (of a wavelength of 830 nm) is backscattered from a particle in water moving at 1 mm/s parallel to the light beam. In general a continuous range of Doppler frequency shifts is expected. Photons scattered by static structures alone do not undergo Doppler shifting.

Find out more about use of this signal and related products for specific applications: 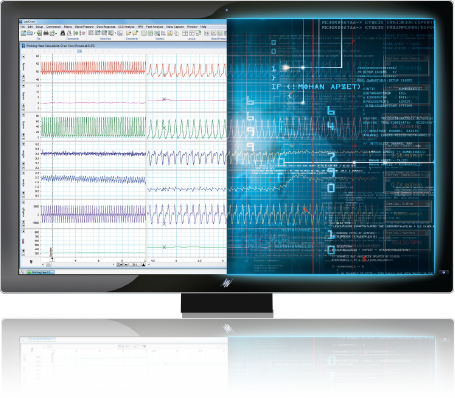 All your analysis in one place

LabChart software is designed specifically for life science data and provides up to 32 channels for data display and analysis options that are powerful and easy to use. With auto-recognition of ADI and LabChart Compatible hardware, multi-window views, one touch recording, simultaneous recording from multiple devices, specialized preconfigured settings, easy sharing options and an interface that can be customized to show only the features you want to use.

This tool combines flexible and clever cycle detection to create a simple to use analysis for periodic waveforms.

The Laser Doppler Flowmeter provides a relative measure of tissue perfusion in the measurement area immediately surrounding the probe. Signal strength can be affected by pressure (between the probe and tissue), temperature and other factors. Thus, the measurement provided is usually acute, with relative changes being the dominant parameter. If repeated measurements over longer period are to be compared, the best approach is to use a challenge to the tissue to prompt a dynamic response in perfusion (temperature or occlusion challenges being the most frequently utilized).

Thanks, we've sent you an email with instructions on how to start your trial.

Thank you for your interest in Tissue Perfusion. Please complete and submit the form below and an ADInstruments representative will aim to get in touch within one working day. If you’d like to speak to someone immediately, office contact information is available from the contact page.

Thank you for your interest in Tissue Perfusion. Please complete and submit the form below and an ADInstruments representative will aim to get in touch within one working day. If you’d like to speak to someone immediately, office contact information is available from the contact page.