Have SkinSuit, will travel: Space physiology team at KCL use Delsys EMG to test a SkinSuit for Astronauts

The SkinSuit aims to help mitigate some of the health problems astronauts face in microgravity. 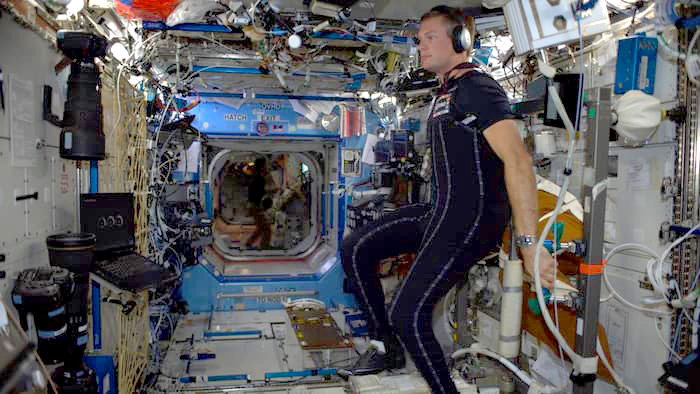 Watching Andreas Mogensen float through the hatch into the International Space Station, his broad smile says it all. For Andreas, visiting the ISS is the fulfillment of a childhood dream “to truly explore like the early explorers did” and the culmination of decades of work and study as an aeronautical engineer. But for Philip Carvil and the team who are watching from King’s College London’s Centre for Human and Aerospace Physiological Sciences, it’s all about the clothes.

Phil, a PhD student at KCL funded by the European Space Agency’s Science and technology Office (ESTEC), has been working with the Space Medicine Office at the European Astronaut Centre to develop and test a ‘loading’ SkinSuit for astronauts that aims to help mitigate some of the health problems they face in microgravity. Specifically, he is looking at how the SkinSuit can affect the spine “with the aim to attenuate spinal elongation in space and assist in preserving the spinal stabiliser muscles.”

Andreas spent nearly two days wearing the suit on the ISS - a huge commitment given the long list of experiments he conducted for various European research groups during his time there. This is the first time the SkinSuit has been worn in space and an opportunity to see how the design and the materials withstand the extreme environment.

Spinal elongation is just one of many negative effects astronauts experience in space but it can be severe. Astronauts can grow by up to 7 centimetres while at low gravity - as Scott Kelly did during his year in space - and suffer debilitating back pain. On return, the weakened spine also slows their muscle recovery due to a highly increased risk of a slipped disk while exercising. Phil explains: “The suit helps by providing about 15-20 percent of the axial loading we normally experience on Earth due to gravity, using elastic resistance that gradually increases from head to foot. We use a lower load as it’s important to balance tolerability and comfort while still allowing enough loading on the spine to stimulate the spinal stabilisers.”

It has taken years of research to get to this point. The suit was first conceived at MIT by James Waldie & Dava Newman as the Gravity Loading Countermeasure SkinSuit (GLCS). ESA then approached the KCL team to collaborate and develop this project for operational use, which has lead to the development of the Ml VI SkinSuit. It’s a development process that sounds very interactive. 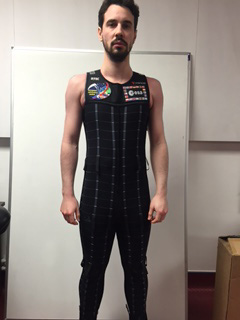 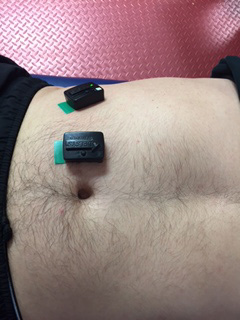 “The testing can be fun, all of us take a turn as guinea pigs of course - I think that’s a given in any human physiology research! And we're using Delsys EMG to really delve into what’s happening from wearing the SkinSuit. We want to understand the mechanisms behind it to ultimately help us determine if this axial loading regulates the levels of spinal muscle activity and fatigue rate. My personal thought is that when we have an increased load placed on the body, it’s going to increase the amount of activity of the muscles and therefore their rate to fatigue - but that’s a hypothesis and it hasn't been proven yet with the SkinSuit.” This study is taking place in collaboration with investigators from the Anglo-European Chiropractic College in Bournemouth.

The best things he has found about the Delsys system? “The fact that it’s wireless is great - with some of the other systems the wires could affect either the loading of the suits or limit the movements we could monitor in a testing session. Using small sensors at very specific points means you also avoid that subjective feel of having wires attached to you.”

And while Phil loves the challenges of his PhD research at KCL’s Space unit, he didn’t take a straight road to get there. “I was fascinated with space as a child and I always planned to study astrophysics but on the day, right at the last minute, I changed to an exercise science programme because I loved learning how the body works. It was only when I started exploring the more extreme side of physiology, looking first at body function in desert climates and diving, then in space that my pathway came back to space in the end - I can apply what I learned to microgravity environments and it’s brilliant.”

A few months after Andrea Mogenson’s return to Earth, the data from the experiments using SkinSuit on the ISS are still undergoing analysis. We’re excited to hear how it stood up to its first space mission. As for Andreas, his feelings after seeing firsthand the vastness of space are an inspiration to all young scientists - and to us: “Seeing how vast space is, the galaxy is, was overwhelming” he said, “I realised there are so many exciting discoveries left for us.”

Read more about the SkinSuit from ESA:

Revealing the identity of SkinSuit man

Suit Up for SkinSuit