Here's how to teach your students a lesson they’ll never forget with the Grip Force Experiment - part of an interactive, immersive, and engaging lab where students examine muscular fatigue using a grip force transducer and explore muscle activity by performing electromyograms (EMGs) on themselves...

Here are the steps for running this interactive and engaging lab activity:

By the end of this lab students will be able to do the following: 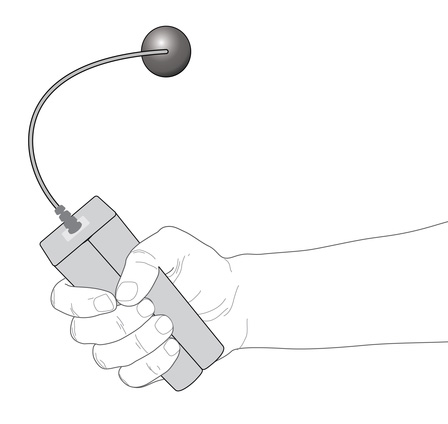 Ask students to imagine they are contracting their muscles at their maximum. Have your students rank the following three factors based on which they think will have the biggest effect on increasing muscle fatigue.

Their answer is the hypothesis that will be tested with the grip force experiment. 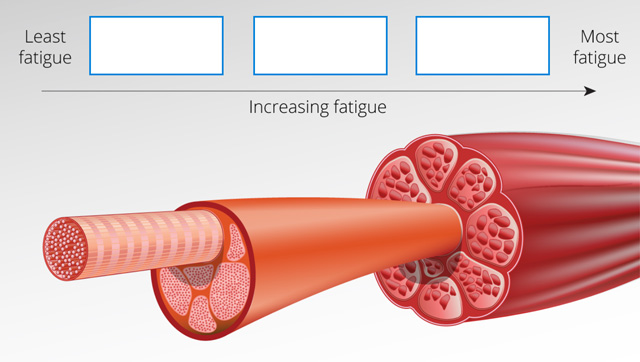 Step 3: Set up equipment to record an EMG

Ask for a volunteer to perform the electromyography procedure, and attach electrodes to the volunteer.

Electromyography is a technique that measures the electrical activity of muscles. The data recorded is an electromyogram; also known as an "EMG" or "myogram".

How to get set up to record an EMG. 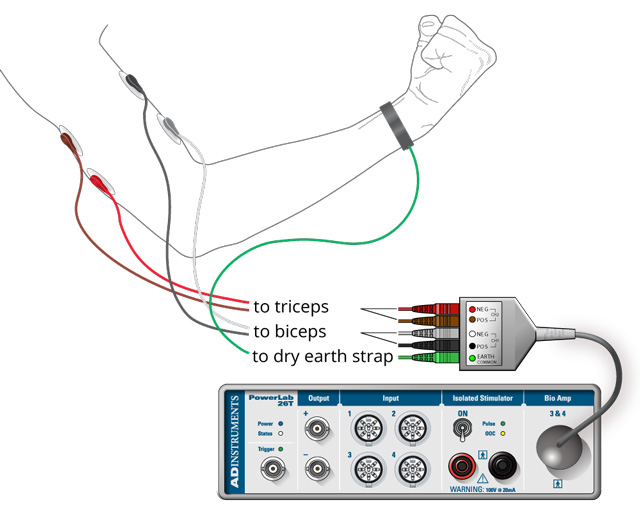 See how to engage your students using real-life data acquisition

The question for students here is: "What does an EMG trace look like and how does it change with increasing muscle activity?"

*RMS indicates the intensity of the activity. Learn more. 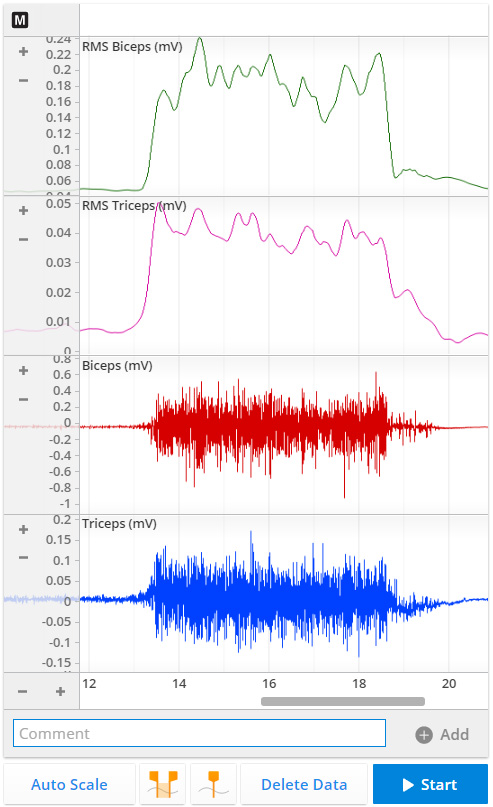 Have your students scroll through the recorded data and note the relationship between the raw traces (Biceps and Triceps) and the processed traces (RMS Biceps, RMS Triceps).

The height of the RMS trace reflects the overall activity of the raw EMG signal, and gives a simpler view of the muscle's electrical activity.

Some questions to test your students’ understanding:

Question: Unlike the discrete waveform from an ECG, the EMG waveform is irregular. Why is this?

Question: How did the EMG trace change when you added weight to the volunteer's arm? Based on the data you collected, what can you infer is happening to the muscles as weight is added?

Answer: When more books were added, the recorded activity (primarily in the biceps) increased. From the recorded data, it can be inferred that greater motor unit activity is required to generate more force in order to hold the arm in the same position when more books are added.

Step 6: Set up & calibrate for the Grip Force Experiment

The question here is: "What happens when we try to sustain a maximal force?" 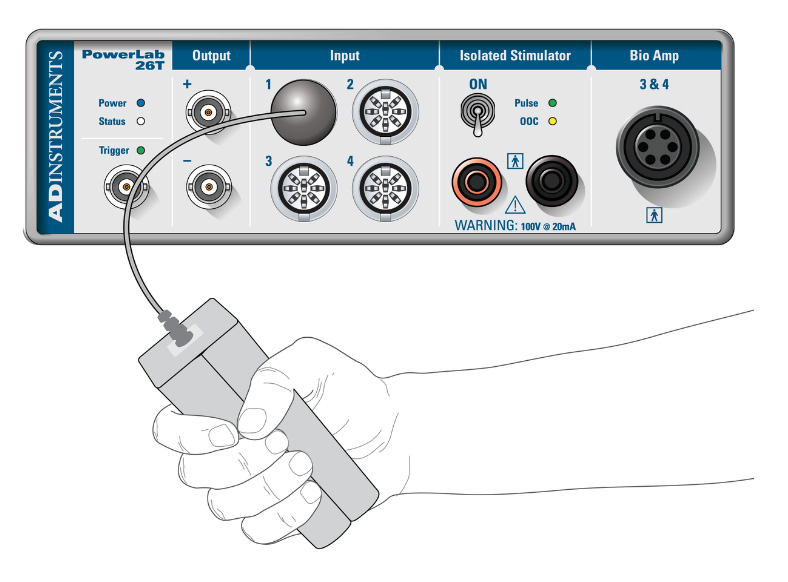 Calibrate the equipment for grip force

Students will now find the volunteer's maximum grip force, and use this to calibrate their grip force from 0–100%.

The calibration is now complete.

The question here is: "How can we explain the decline in maximal force during a sustained contraction?"

This phenomenon is called "muscle fatigue".

Ensure the volunteer can see the computer screen where their signal will appear.

In this analysis students will determine how fatigue affects grip force at different intensities.

Question: Did this experiment help you decide which of the factors proposed to explain fatigue are important?

The question for students here is: "Can we alter the extent of muscle fatigue by verbal encouragement, or brief rests?"

Ensure the volunteer cannot see the computer screen where their signal will appear.

In this analysis students will determine the effects of encouragement and brief rest on sustained maximal grip force.

Question: From your data, do you think that verbal encouragement or brief rests limited the extent of muscle fatigue?

Answer: Encouragement and brief rests have been shown to limit fatigue to some extent during sustained maximal grip force.

Question: During sustained skeletal muscle contraction, can you think of three places in which true fatigue might occur?

Answer: The main place true fatigue is likely to arise from is the skeletal muscle cell, in which:

A reduction in Ca2+ ion release (due to depletion of Ca2+ ions from intracellular stores) could potentially inhibit excitation-contraction coupling, or

Metabolic changes in the muscle cell (such as build up of lactic acid which can make the skeletal muscle acidic, inhibiting any further anaerobic glycolysis), which is more likely to occur in extreme exercise.

Actual muscle fatigue may not just arise in the skeletal muscle cell. It could also occur at the neuromuscular junction (NMJ), possibly due to depletion of acetylcholine stores or decreased sensitivity (desensitization) of ACh receptors, resulting in decreased effectiveness of neuromuscular transmission. It may also occur due to a reduction in blood flow (and hence limited O2) to the muscle owing to compression of blood vessels..

The question for students here is: "What effect does visual feedback have on the ability to maintain a grip contraction with constant force?"

Ensure the volunteer can see the computer screen. Allow the volunteer to use their other hand if gripping the transducer has become painful.

Question: Examine the data recorded when the volunteer attempted to maintain a 50% contraction with their eyes shut.

Almost all volunteers will show a declining force (pseudo-fatigue) while their eyes are shut that is very similar to actual fatigue. This is not true fatigue because the full 50% force can be exerted easily, as can be seen when the volunteer's eyes are opened again. What explanations can you think of for pseudo-fatigue?

Answer: In the absence of information on the actual force produced, the internal sensation of fatigue can predominate and lead to a decline in the force generated.

At the beginning of this lab, you asked students to make a hypothesis by ranking three factors based on which they thought would have the biggest effect on increasing muscle fatigue.

Discuss with students how their experience of testing each of the factors in the lab would require them to reform your hypothesis? If so how? 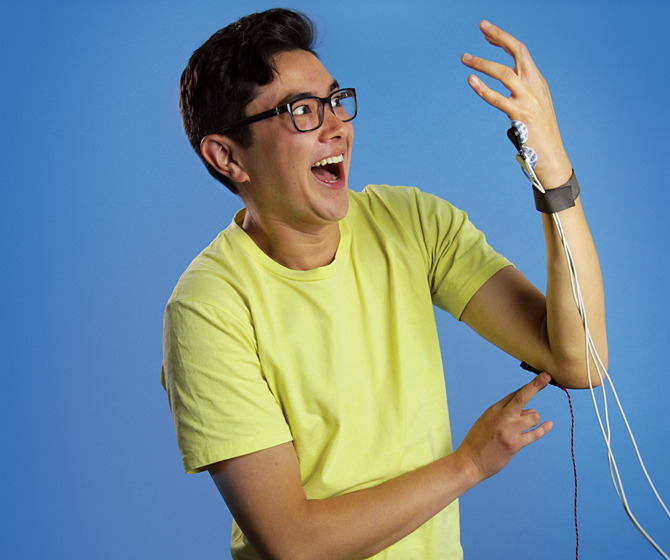 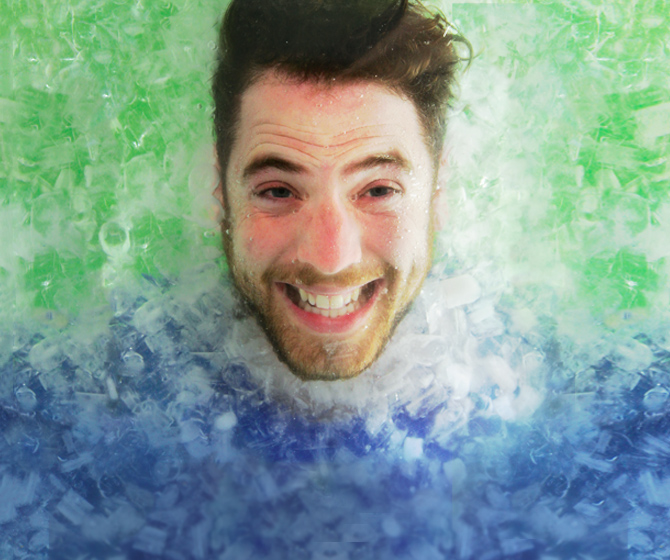 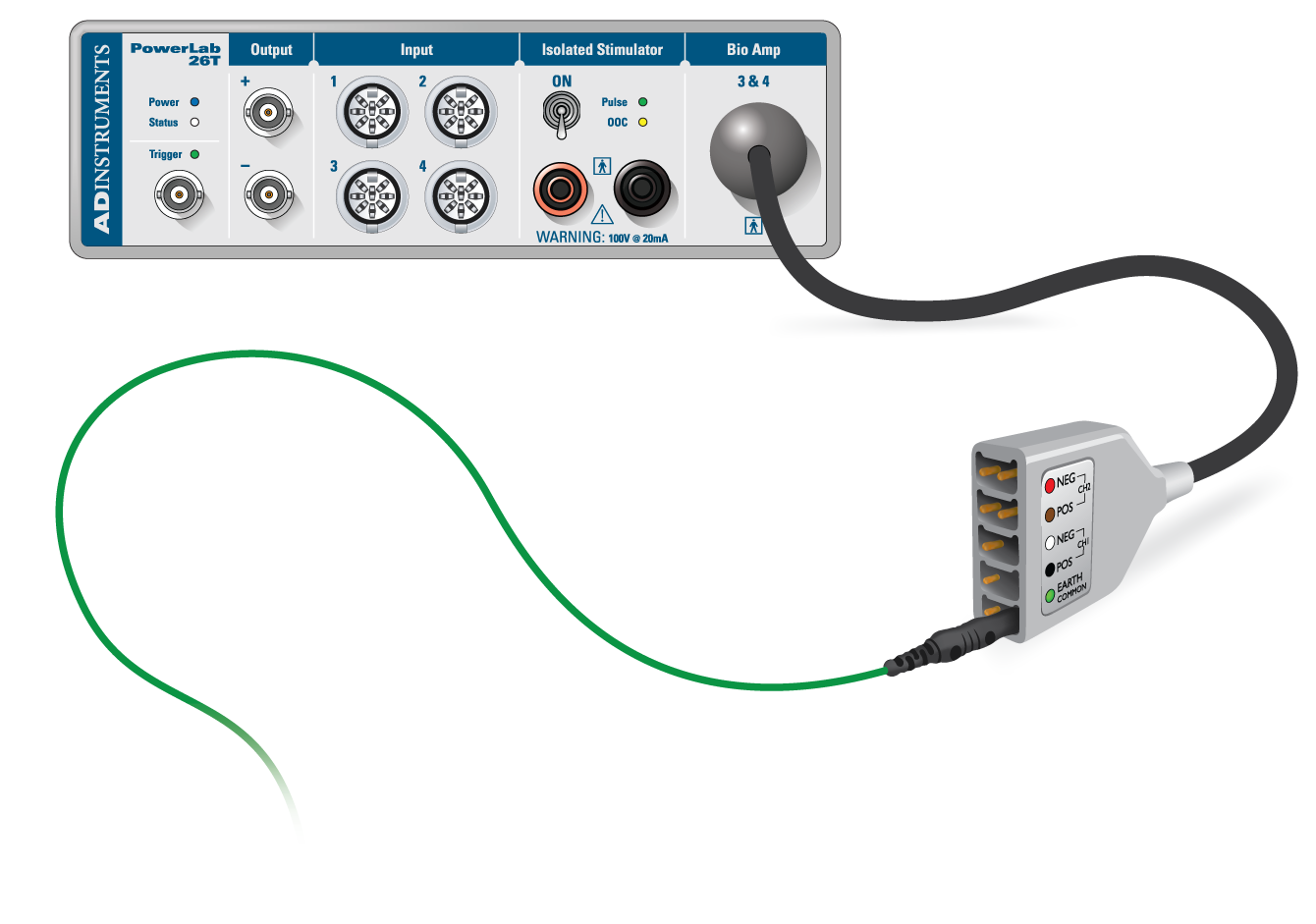 The single connector cable of the dry earth strap should be placed on the single pin nearest the EARTH label. 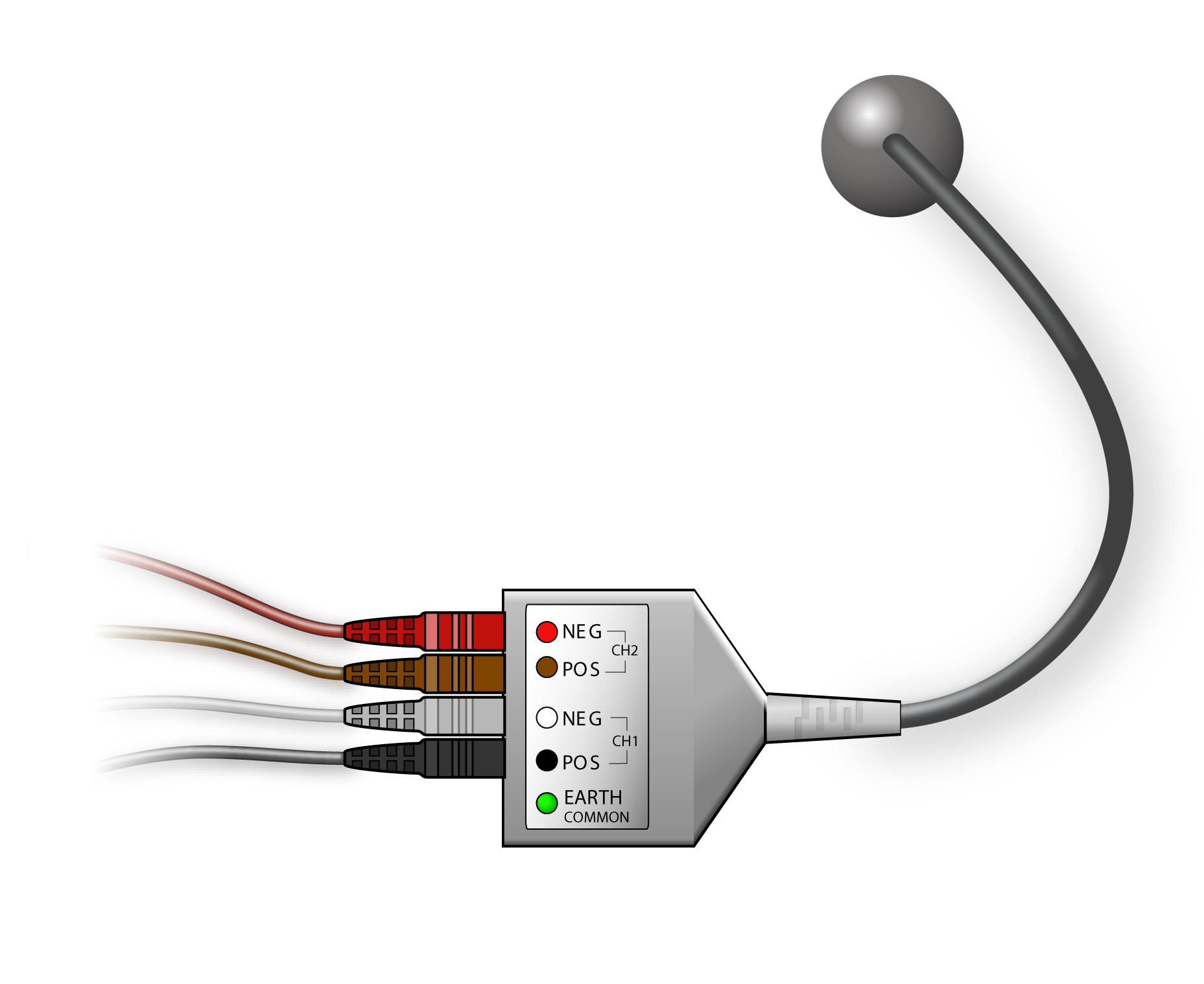 The remaining shielded cables should be connected to CH1 and CH2 of the Bio Amp cable.

How is RMS calculated:

You will have noticed that the raw EMG signal values fluctuate above and below zero. From this we cannot directly get a meaningful value of intensity. The mathematical "trick" to deal with this is to use an RMS calculation. This is how it works:

The RMS gives an indication of the strength of the contraction at any given time. RMS has the same units as the raw data.

Lt comes complete with 500+ ready-to-use, fully customizable lessons and labs for teaching physiology, anatomy, biology, chemistry, medicine and nursing courses. Click below to instantly preview a selection of Lt lessons, or sign up for a 90-day free trial. View all 11 content collections »